In 1960 Rovers knocked Burnley out of the FA Cup Quarter-Final and went to the final themselves thus preventing a possible Burnley league and Cup double. The Final itself was a disaster for Rovers.

Dave Whelan, left back for Rovers, before playing Wolverhampton Wanderers in the FA Cup Final at Wembley, 1960. Whelan broke his leg in the final reducing Rovers to 10 men in the days before sub's were used and it was all down hill from there. (Mr Whelan is now Chairman of Wigan Athletic, a Rovers fan and still affectionately remembered by the Rovers faithful).

THE iconic image of a great servant to Blackburn Rovers FC and club legend.

Another great image of the man in action.

A very tidy looking Riverside. Ronnie Clayton takes a throw in from the Nuttall Street Stand.

Rovers legend Tony Parkes, Howard Kendall (who left Rovers to manage Everton after narrowly missing out on promotion to Division 1 with Rovers on goal difference to Swansea City the following season and who then won two League Championships with Everton) and Andy Crawford as Rovers clinch promotion from Divison 3 at Bury, 1980. Rovers fans had the joy of waving ta-ta-for-now to Burnley who were relegated to Division 3 as Rovers were promoted from it. 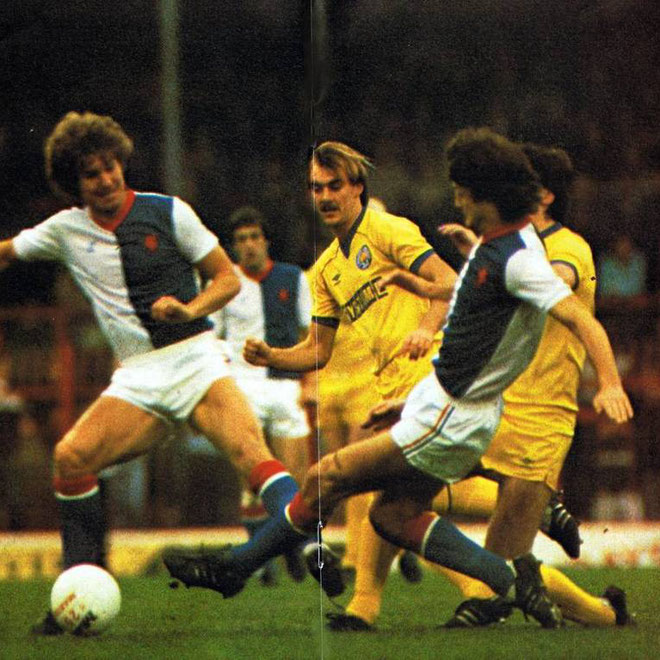 Rovers players celebrate with the trophy after their 1-0 victory.

The Blackburn Rovers strike force of  Chris Sutton and Alan Shearer hoist the Premier League trophy at Anfield, where they won the title.

Rovers players look dejected (even UTD's) as their goalless draw against Manchester United, in their Premier League match at Ewood Park, means relegation for Rovers.

Blackburn lads Dunn and Lowe show Chelsea how it's done.

David Dunn very pleased with a victory over Burnley at Turf Moor and the quality of the Rovers support.