Bob Crompton  spent the entirety of his career with his hometown club, Blackburn Rovers.

His 41 England caps were a record until surpassed by Billy Wright in 1952.

What they said about him: "Crompton was undoubtedly the outstanding full-back of his time. A commanding personality, he was the best kicker of a ball I ever ran across." Charlie Buchan who played with Crompton for England in 1913.

Crompton had a heart attack in 1941 while watching Blackburn Rovers play hated rivals Burnley, while he was still in charge of Blackburn. His team had just won the match 3-2. He died that evening.

Playing Position: Half Back

Harry Healless joined Blackburn Rovers just after World War 1. A half-back, Healless made his debut against Sheffield United on 20th October 1919. A game that Rovers lost 2-0.

On the 22nd October 1924, Healless won his first international cap when selected by England to play against Ireland. Although England won 3-1 Healless was dropped from the team.

According to Mike Jackman (The Essential History of Blackburn Rovers): "Not the most skilful of performers, there was a tenacity about Healless that enabled him to be used in a variety of positions. His strong running, tough tackling and relentless work ethic endeared him to the powers that be. He eventually won a place in the half-back line and proved proficient in all three positions."

In 1926 Bob Crompton was appointed as manager of Blackburn Rovers. He began to build a team around star players, Henry Healless, Jack Roscamp and Syd Puddefoot. This brought a change in the fortunes of the club and they did very well in the FA Cup in the 1927-28 season. Blackburn beat Newcastle United (4-1), Exeter City (3-1), Port Vale (2-1), Manchester United (2-0), Arsenal (1-0) to reach the final at Wembley. Puddefoot and Roscamp both scored four goals in the earlier rounds.

Huddersfield Town were favourites to win the final. However, in the first minute Roscamp received a pass from Puddefoot. He chipped the ball over the head of Ned Barkas. Billy Mercer, the Huddersfield goalkeeper, attempted to catch the ball. Roscamp collided with Mercer and the ball slipped out of his grasp and trickled into the empty net. Tom McLean added a second after 22 minutes. Alex Jackson got one back for Huddersfield but Roscamp scored his second and Rovers' third in the 85th minute to give Rovers a well-deserved victory.

Bob Crompton retired as manager in 1931.

Healless joined the coaching staff in 1932.

Healless moved to Holland to coach the Alemio club in 1935. He also rejoined the B coaching staff in 1951 but left the job two years later.

He made his Football League debut in the final match of the 1947–48 season, with Blackburn already doomed to relegation. Although Blackburn were to spend the next ten seasons in the Second Division, Eckersley's consistent performances led to him being considered one of the best full-backs in the country.

As Blackburn continued in their attempts to return to the First Division, Eckersley continued to give good service to both club and country, collecting a total of 17 caps, as well as three "B" caps and representing the Football League on six occasions.

Eckersley had the ability to dribble all the way up to the opposition penalty area. With superb ball control, he was able to let a player pass him; he would then extend his left leg behind the opponent and nick the ball away without fouling the opposing player, thus earning him the "telescopic leg" tag.

Tommy still holds a record for scoring 7 goals in a single match for Blackburn against Bristol Rovers on 05/02/1955 which Rovers won, 8-3. 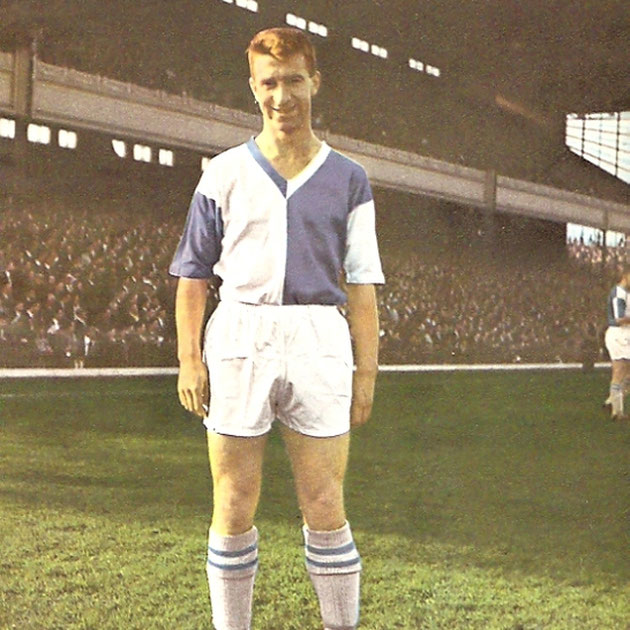 He appeared in two World Cups, in 1958 and 1962, appearing in all of England's matches in the two tournaments.

On 13 August 2011, as a sign of respect to Clayton, it was announced at half-time during the first game of the 2011/12 Barclays Premier League season, that theThe Blackburn End was to be renamed The Ronnie Clayton Blackburn End.

Ronnie Clayton made nearly 600 appearances in the Football League playing for Blackburn Rovers. He was capped 35 times for England between 1955 and 1960.

Clayton, a right half, began his career with Blackburn Rovers. He made his first-team debut as a 16-year-old in the 1950–51 season, and between then and 1969 made 581 appearances for his only Football League club.

He then becameplayer-manager of Morecambe, and also appeared for Great Harwood Town before retiring.

Parkes was a midfielder who started his career in non-league football at Buxton in 1969 before moving to Blackburn Rovers in 1970 where he spent the rest of his playing career.

He played a total of 350 league games and scored 38 goals for Rovers before retiring in 1982.

On 18.05.2005 Tony Parkes was awarded a Testimonial Match by Blackburn Rovers.

The game was delayed ten minutes to allow a crowd of 13,584 to witness a thoroughly entertaining match, as they cheered on their heroes past and present.

Began his career with his local club Blackburn Rovers in 1967. He would become one of the pillars of the club during the 1970s, part of a trio of players who stayed loyal to the club through the decade including Tony Parkes and Derek Fazackerley. His midfield partnership with Tony Parkes was instrumental in the club's Third Division championship in 1975.

Spent the majority of his career playing for Blackburn Rovers.